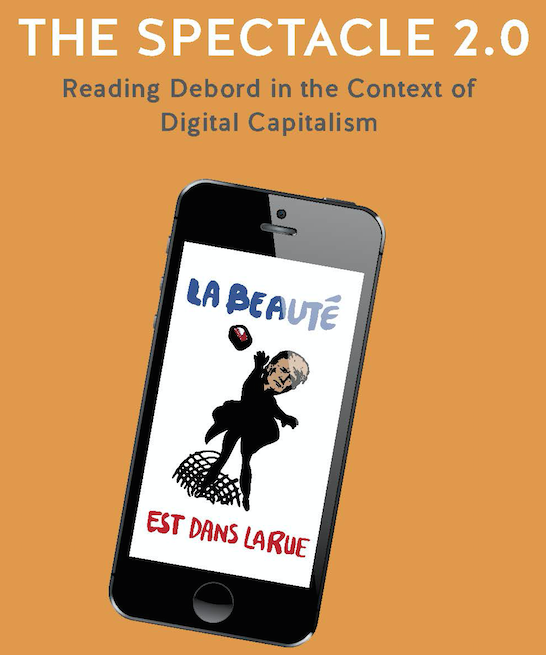 Guy Debord‘s idea of Spectacle is reconsidered in Spectacle 2.0: Reading Debord in the Age of Digital Capitalism the 5th title to be published in UWP’s open access series Critical Digital and Social Media Studies‘ edited by Christian Fuchs. In this extract from their introduction tracing the journey of Debord’s theories to what seems an age of digital capitalism and hyperspectacle editors Marco Briziarelli and Emiliana Armano reflect on some of the steps in the transition to a new modality Spectacle 2.0. The full chapter ‘From the Notion of Spectacle to Spectacle 2.0: The Dialectic of Capitalist Mediations’  continues to explore Spectacle 2.0’s embedding in digital labour, neoliberal subjectivities and knowledge work and is published open access can be read or downloaded for free.

‘For Debord, the narrative connecting the integrated Spectacle to its original form is one of capitulation because while in his original analysis there were pockets of social life, practices that could remain unaffected by the Spectacle— such as art or the very initiatives performed by the Situationists and avant-garde art—in the Comments he claims that the Spectacle has colonized every­thing. The integrated Spectacle, especially detectable in countries such as France and Italy, could be identified by five principal features: ‘incessant technological renewal’ that continues both mode of production and consumption; ‘integration of state and economy’ produced by state capitalism; ‘generalized secrecy’; ‘unanswerable lies’ created by systematic disinformation that eliminated the critical function of public opinion (pp. 8–10) and an eternal present. Looking at the news as the Spectacle, Compton considers the aestheticization of everyday life, as ‘the central logic of the Spectacle.’ As Compton (2004) observes, one of the salient aspects of such an integration, which in our view allows the transition into the Spectacle 2.0, is that current manifestations of the Spectacle need to be understood as a result of the practical use of the spectacular commodity, marketed as both production and promotion, that is, as an integrated system of production/promotion. In doing so, Compton tries to address some of the shortcomings that the original definition of the Spectacle represented by exploring in more depth the complex unity among various instances of production, consumption, distribution, and exchange. He also replaces the mass society critique narrative of passive individuals he detects in the original Spectacle, with a more nuanced account that recognizes a more active involvement of the spectators.
…
Wark (2013), provides one of the most recent engagements with the Spectacle, when in his The Spectacle of Disintegration he offers an alternative understanding of the evolution of the Spectacle. He claims that in the digital era the Spectacle did not disappear but its experience significantly changed, as instead of being perceived as a unified whole, it appears as a fragmented micro Spectacle. Its dis-integration is highly deceptive because, while experienced as a sort of liberation from the intrusive and manipulative aspects of traditional media and tied to the rhetoric of democratization of media production of new media, its reproduction depends on the free labour of the ‘spectators’. In fact, those spectacular fragments are frequently not produced by digital platforms but by their users and therefore constitute a representation that is even more pervasive. Although with its emphasis on media technology and its expansion towards more areas of social life, the integrated Spectacle may be considered a more accurate depiction of current circumstances. In this volume we assume that in the context of contemporary capitalism and the prominence reached by information and communication technologies in such a mode of production, the Spectacle has evolved into a new qualitatively different modality that we define as the Spectacle 2.0, which presents both aspects of continuity and ruptures with its previous arrangements. As we have already mentioned previously, we considered that although the Spectacle 2.0 is still founded on the core dialectical tensions defining the original Spectacle, it is reconfigured in such a way that qualitatively deserves a new taxonomy … a Spectacle certainly propelled by a new aesthetics, with a renewed prominence of (new) media, and characterized by interactivity.’

Debord, Guy. 1998. Comments on the Society of the Spectacle, translated by Maimrie, London: Verso.