Flags, emblems, monuments, street names, statues are some of the means by which nations and states promote themselves, both to their own citizens and to the world at large; the public face of our imagined communities. But as they seek to unify, such symbols have often been the occasion for contestation, disagreement, violence even. Empires, systems, regimes rise and fall. Societies change, and with such change comes a reassessment of societies’ symbolic life, as yesterday’s heroes become today’s villains, past triumphs a present embarrassment. The past is continually raked over, re-examined and reinterpreted, with each re-examination argued over. Examples abound from across the globe: the toppling of Rhodes’ statue in Cape Town in 2015; in Budapest, Soviet era leaders are gathered together in Memento Park. While Ukraine had by 2017 decreed the removal of all 1,320 statues of Lenin. And in Germany there are no monuments commemorating the military in the war years. In the USA, statues of Confederate leaders are being taken down; thwarted by a statute forbidding such removals, the mayor of Birmingham Alabama had one offending figure covered in plastic. Outside Delhi statues of military and British royalty languish, a ‘shambles’ in a ‘veritable dust bowl’ (Times of India) awaiting a revamp that never seems to arrive, the neglect telling its own story. In the UK the national flag and the statues of slavers are being fought over by the government and sections of the population deploying memes, hashtags and video footage whilst also appearing in official and commercial films, TV, documentary, news footage.

Submissions are welcome covering the role of the media in all forms (from public service broadcasting to social media, feature films to advertising) exploring contested representations of such symbols and their remediation. WPCC publishes research articles, commentaries and book reviews. For guidelines see https://www.westminsterpapers.org/site/author-guidelines

Deadline for abstracts:
Please submit a 150-250 word abstract with keywords to WPCC’s submission system with 6 keywords by Monday 28 June 2021 by registering at here uploading the abstract in addition to filling in the submission details. You will receive feedback regarding encouragement to submit a full paper (a resubmission on the system) or feedback from the issue editor(s)/WPCC within 7-10 days later.

Deadline for full papers:
Full papers are expected by Monday 30 August 2021, 23:59 submitted to the WPCC system. All papers will go through double peer-review.

Publication date: from 1 November 2021
WPCC is an open access journal and there are no fees for contributors. Published by the University of Westminster Press in conjunction with CAMRI. All content in this issue and in its archive is available free to read.
www.westminsterpapers.org

Editors David Chandler, Andreas Philippopoulos-Mihalopoulos and Jane Lewis of the University of Westminster explain the background and their thinking that led to its creation:

‘Anthropocenes – Human, Inhuman, Posthuman’ seeks to explore the implications of the Anthropocene from the perspectives of the social and life sciences, arts and humanities. We see the Anthropocene as an invitation to think differently about ways of being in the world and how we operate within, across and beyond our disciplinary framings. We take inspiration from Val Plumwood’s view that the Anthropocene poses the question: ‘Is it to be a posture of openness, of welcoming, of invitation, toward earth others, or is it to be a stance of prejudged superiority, of deafness, of closure?’ At present we feel that there is too little invitation: work on the Anthropocene often seems divided between climate scientists working along technical and managerial lines and, what can come across as, fairly aloof and abstract philosophical approaches. We seek to work to expand the area of Anthropocene work which can often be obscured by this divide; working out from the middle as it were.

For us, the Anthropocene poses questions that go far beyond narrow technical or governmental concerns of how to address issues such as climate change and global warming. While some contributors may, no doubt, be concerned with preventing, slowing or opposing the Anthropocene as a future to come, we hope that others will provide a critical, constructive and exploratory focus upon what it means to live within the Anthropocene as a time in which the certainties of the modernist world are becoming undone. Our desire is that this journal will pursue the open-ended and future-oriented invitations of the Anthropocene through building new cross-disciplinary research communities, facilitated through publishing in an open access format available to all.

We feel that the time is right to establish a world-leading interdisciplinary journal placing the University of Westminster at the centre of contemporary conceptual debates and practices. Drawing upon our unique strengths across diverse fields from the arts and media to the human sciences, via law, architecture and politics, Anthropocenes will engage and work with leading and upcoming international academics and practitioners looking for an interdisciplinary outlet and keen to develop and initiate debate through traditional and non-traditional forms of publication including visual and audio links.’

In this extract from the introduction to our latest title editor Andrew Smith outlines the increasing presence and significance of London’s tourism.

Available to read or download open access Destination London: The Expansion of the Visitor Economy was published on the 21st May and is an initiative of the Tourism and Events Research Group of the University of Westminster. (The complete referenced version of the introduction is available on its own here).

‘London hosts a very significant visitor economy and overnight visitors contribute approximately £14.9 billion of expenditure to the city every year. When the city hosted the Olympic and Paralympic Games in 2012 the UK’s capital was already a leading global destination, but staging this mega-event instigated a new period of growth. In the period 2011-2016 tourism numbers increased by 25% and over the past few years the city has experienced a series of record years for arrivals. Despite already being one of the three most visited cities in the world – hosting 31.2 million overnight visitors in 2016 – city officials expect visitor arrivals to increase further: to over 40 million overnight visitors by 2025. Put simply, tourism is already a very significant economic and social phenomenon in London, but over the next few decades it will become even more pivotal and pervasive.

London’s status as one of the world’s most visited destinations is not universally welcomed. At the moment there is considerable media and academic attention dedicated to the problem of rapid tourism growth and what has become known as over-tourism. This coverage has focused on various European capitals: from Berlin to Barcelona, Ljubljana to Lisbon. Even though the UK’s capital city seems like the ideal case through which to explore the ways that destinations evolve and expand, there has been surprisingly little attention devoted to London in these debates. This book explores how and why tourism is growing in Europe’s most popular city destination; and what benefits and problems accrue from expanding the tourism sector in a city already hosting 19 million overseas tourists and 12 million overnight domestic visitors every year. These additional people mean London’s population grows considerably every day, especially when one considers the 300,000 people that commute daily to the capital from outside Greater London and the daily influx of 750,000 non staying visitors. London hosts a residential population of around 8.8 million people, but its ‘daytime’ population – i.e. that which includes workers, visitors and tourists is estimated to be over well over 10 million. Tourists and day visitors now make up over 10% of London’s daytime population.

The book analyses how and why the expansion of the visitor economy is happening; and what effect this is having on the city. Contributions from various authors demonstrate how Destination London is developing through the extension of tourism into new spaces and new spheres. The book outlines how parts of London not previously regarded as tourism territories – e.g. residential suburbs, peripheral parks and private homes – are now subject to the tourist gaze. Tourists are being encouraged to visit places outside the centre and stay in accommodation owned by residents. In a similar manner, London is constantly creating new eventscapes to capitalise on the experience economy and providing reasons to visit at different times – in winter and at night. These types of initiatives feature prominently in London’s new ‘Tourism Vision’, which explicitly outlines the city’s aim to grow tourism ‘by encouraging visitors to explore the city’s outer districts, both in and out of season and around the clock’ .

Contemporary expansion is being facilitated by extending the capacity of existing services (e.g. by running the Underground 24 hrs a day), and by building new infrastructure (e.g. the new Crossrail network and a new runway at Heathrow Airport) and accommodation provision (plans for 23,000 new hotel rooms by 2025). However, growth in the visitor economy is driven more by market and cultural trends than any deliberate planning and policy; and this unfettered growth is likely to outrun formal provision. The rise of social media and the sharing economy, and the desire for new, distinctive and personalised experiences, are pushing tourists into peripheral locations, but also advancing tourism into spheres not normally considered tourism territory.  Growth is likely to be enabled and absorbed by unofficial tourism providers including London’s residents who now provide a range of services: most obviously accommodation, but also food, travel, and guiding. This book explores these trends and, in doing so, highlights the mechanisms and processes that are driving the expansion of the visitor economy. The discussion enhances understanding of London, but it also helps us to better appreciate the ways that tourism in cities is expanding into new spaces, times and spheres’. 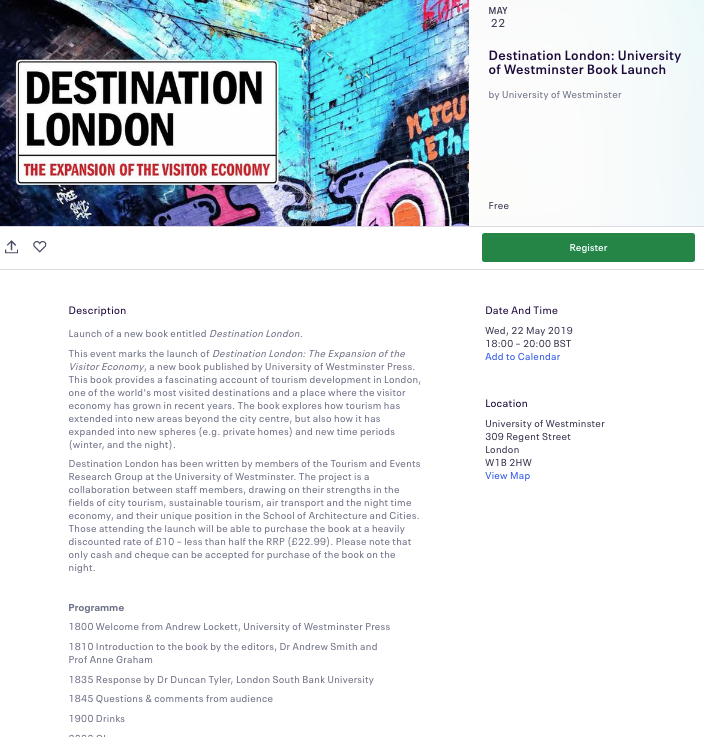 Destination London: The Expansion of the Visitor Economy will be published and launched on the 22nd of May at 18.00, the Boardroom, University of Westminster 309 Regent Street London W1B 2HW.

This book provides a fascinating account of tourism development in London, one of the world’s most visited destinations and a place where the visitor economy has grown in recent years. It explores how tourism has extended into new areas beyond the city centre, but also how it has expanded into new spheres (e.g. private homes) and new time periods (winter, and the night). A collaboration between University of Westminster staff members, drawing on their strengths in the fields of city tourism, sustainable tourism, air transport and the night time economy, and their unique position in the School of Architecture and Cities with particular focus on tourism and events.

For full details and signing up see eventbrite.