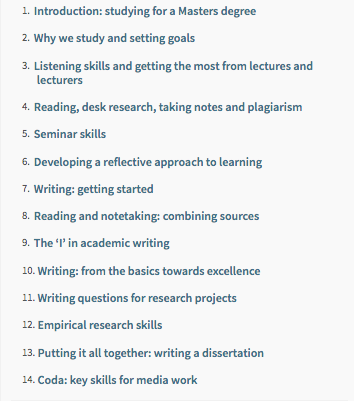 The University of Westminster Press launched its first title for MA students on study skills in media and communications courses. Author Doug Specht, Director of Teaching and Learning School of Media and Communications at the University of Westminster explained the origins of The Media and Communications Study Skills Guide at a-well attended event at Westminster’s Harrow Campus. The book highlights all sorts of study advice from listening to referencing, seminars to writing essays and to conjuring up a research question for the dreaded MA dissertation.

It includes numerous hacks and tips, graphics, tasks, planners, tasks and guides to such matters as notetaking.

Here – to get a sense of a sense of the flavour of the book – is the author’s advice on where to work:

“Think about where you are working; try not to work in bed, so you have a separate space to rest. Consider whether you prefer working in the library, the kitchen table, your desk or in a café. Once you know your best working space (this might be different for different types of work), stick to this – I like to do emails and admin work in public spaces, but I need music to write and silence to edit, so I ensure I move around when working on different parts of a project. Also, think about the light and temperature in the room you are working in. Consider spending a little money on a good lamp – Michel Foucault, the French philosopher and social theorist, used to take his own to libraries and lectures. You should also break tasks down into smaller chunks or sub-tasks – there are some pages to help you do this at the end of this book. You can also use technology to help you with this, there are loads of task management apps available, although trying them all out can become a form of productive procrastination, so be careful!”

Read the book, purchase in print or download from the University of Westminster Press. 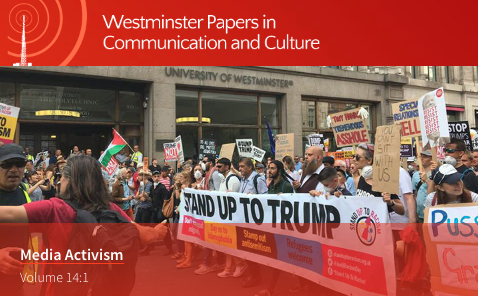 As a new WPCC issue on Media Activism is published editors, Anastasia Denisova and Michaela O’Brien highlight the key issues for the issue in their editorial ‘From High Visibility to High Vulnerability: Feminist, Postcolonial and Anti-Gentrification Activism at Risk‘. What follows is an extract.

In times when hijacking of terms and stories happens on a daily basis, activism also means constant narrative recreation and damage control. Some scholars call the internet a patriarchal structure (Megarry, 2018) and there are voices that demand gender equality of the online space. The rallying cry of ‘We should all be feminists’ (Chimamanda Ngozi Adichie) is turning into ‘We should all be activists’ as new reports emerge concerning male bias in AI (Crawford, 2016; Adam, 2006; Leavy, 2018), sexist coding of digital voice assistants (West, Kraut and Ei Chew, 2019), the inherent inequality of AI-assisted recruitment processes (Dastin, 2018), and inequality of activism too. Female protesters and activists of colour face more challenges than others – due to the outbursts of toxic masculinity, racial abuse, cow­ardly anonymous online attacks and imbalance of visibility when it comes to hierarchy of influence. These issues are as virtual as they are real – and they need to be addressed to maintain liveable societies.  As editors, we wanted to explore the possibilities for progressive activists around the world to use the media to resist the current rise of the extreme right along with disturbing and growing evidence of the techniques of fascism: populism, propaganda and fake news, hate speech and rise of hate crimes. We define ‘activism’ as ‘the widest range of attempts to effect [progressive] social or cultural change’ (Meikle, 2018: iii), while ‘the media’ includes a broad range of communication platforms, from traditional journalism to digital networks.

[The University of Westminster runs an MA Programme in MEDIA, CAMPAIGNING AND SOCIAL CHANGE].

Leavy, S. (2018, May). Gender bias in artificial intelligence: The need for diversity and gender theory in machine learning. In Proceedings of the 1st International Workshop on Gender Equality in Software Engineering (pp. 14–16). New York: Association for Computing Machinery. DOI: https://doi.org/10.1145/3195570.3195580.

Special collections on ‘Journalism and the Digital Challenge’, ‘Censorship and Propaganda’ and ’Television Studies’ have been released by WPCC. Freshly compiled the special collections bring together previously published material on these related general themes from all our previous issues that included relevant content.

Over a longer period many more additional collections will be added to improve access to our extensive list of articles and aid research searches for particular topics over time, enabling at ‘at-a-glance’ views of WPPC coverage of particular areas. Further special collections are due to appear in September 2019.

Westminster Papers in Communication and Culture is an open access journal.

Here in an extract from his editorial Doug Specht in the latest issue* of Westminster Papers in Communication and Culture  reflects on how space has not gone away or been ‘annihilated’. He considers how communication theories may help understand a world in which maps of all kinds are being reconfigured with the aid of the users and suppliers of Big Data  as space in all dimensions is being mediated and reshaped.

Late twentieth century communication and information technologies have produced such a blurring of what is real and what is representation that the two can no longer be distinguished (Corner, 1999), leading to persistent questions over how human behaviour is constituted through space and time, and within specific social contexts (Dear, 1988). Our mappings of the world, be they through cartographic representations and data visualizations (Space-in-media), or mediated senses of place (Place-in-Media, and Media-in-Place), are in-between the virtual and the physical. A distinction not to be confused with a distinction between real and fake, ‘as we would not claim that our bodies are real while our minds are fake’ (Smith, 2017: 30). Did you find the world or did you make it up? asked Winnicotts (cited in Corner, 1999), a salient question indeed. The information super-highway agenda of the 1990s was designed to change the very fabric of society (Robins, 1997), to create a homogenized flow of communications transcending geography (Greig, 2001). This post-modern condition of ‘space-time compression’ (Harvey, 1989) would annihilate space. Yet, space has not disappeared, but has re-established itself in new spheres, created of ever larger data, and increasingly mediated, and must then be understood through the use of semiotic and communication theories, such as the Marxist spatial frameworks of Castells and Lefebvre, or the Ideologiekritik of the Frankfurt School (Lagopoulos, 1993). The postmodern creates tensions between all theories in an attempt to best understand the conditions of existence, at its core, perhaps, lies the dialectic between space and society; a geographical puzzle in which structures, institutions and human agents operate on different scales to define spatial patterns in any given locale (Dear, 1988). The individual does not disappear in the midst of the social effects caused by the pressures of the masses, but is instead affirmed (Lefebvre, 1991). It is seeing that establishes our place in the surrounding world; we explain that world with words, but words can never undo the fact that we are surrounded by it, as Fuchs (2018) states: ‘means of communication are (just like social space) means of production through which humans produce social relations and therefore also social space’ (p. 19). The relation between what we see and what we know is never settled. Each evening we see the sun set. We know than the earth is turning away from it. Yet the knowledge, the explanation, never quite fits the sight (Berger, 1972/2008). While human geography has always been a maze of diverse interests (Dear, 1988), the use of Geographic Information has changed dramatically in the past decade, and continues to do so; increasingly it is used in mediated practices, to shape stories, to transcend boundaries, to develop new ethereal networks, as well as to produce maps. But even in those maps, users themselves are being encouraged to crowdsource data, be that to add to the ‘usefulness of the map’ or to create counter maps. Data has become the standard way in which the world is ordered (Thatcher and Dalton, 2017), with those that link location and temporal information being seen as fixes for capitalism’s tendencies towards over-accumulation (Greene and Joseph, 2015). As the scholars in this issue demonstrate, there is much to be gained from the combining of communications theories and those from the geographic disciplines. Bringing the two together allows for an alternate, nuanced, and a spatially grounded approach to envisioning the myriad ways in which the digital age mediates social, economic and political experiences and, in particular, in the increasingly technologically informed media and communications sector.

Still relevant, useful and controversial after 30 years,  Edward S. Herman and Noam Chomsky’s Propaganda Model is considered afresh in the age of Trump, digital media and social media manipulation. Published within UWP‘s Critical Digital and Social Media Studies series edited by Professor Christian Fuchs the book is a wide-ranging examination of the topic.

Including a new interview with Edward S. Herman before his passing in 2017 the book reassesses the model’s strengths and relative limitations, offers applications to the internet and world of digital media, to sport and screen entertainment in addition to which presents specific case studies on topics as diverse as the 2008 financial crisis and austerity in Britain, Cuba and the use of nuclear weapons. It suggests that there may be a case for considering new filters and outlines reasons for the model’s continuing explanatory power.

In 2009 Westminster Papers in Communication and Culture analysed the PM after 20 years.

Much has changed but has much also stayed the same?

A new WPCC issue re-evaluates China’s much debated ‘going-out’ strategy as it has developed. It extends the debate about China’s media expansion by focusing on the act of communicating the ‘going-out’ message and how it has been received by residents of Latin America, the USA and Africans studying in China.

Eleven contributions consider television news to radio, Twitter, the financial structures of Chinese internet firms alongside book reviews of publications on Chinese and global media politics offering new data and interview material as well as alerting readers to some of the most useful theoretical tools to develop understanding.

The issue is guest-edited by Vivien Marsh.