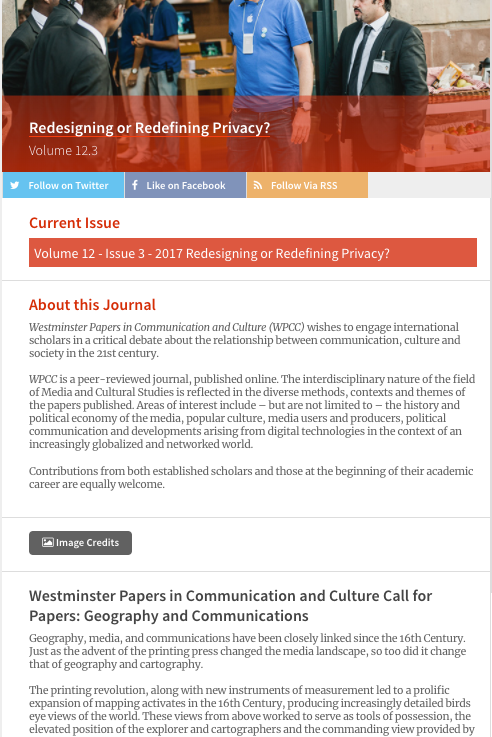 Westminster Papers in Communication and Culture: Call for Papers

Geography, media, and communications have been closely linked since the 16th Century. Just as the advent of the printing press changed the media landscape, so too did it change that of geography and cartography. The printing revolution, along with new instruments of measurement led to a prolific expansion of mapping activates in the 16th Century, producing increasingly detailed birds eye views of the world. These views from above worked to serve as tools of possession, the elevated position of the explorer and cartographers and the commanding view provided by the maps mirrored the divine gaze of God, positioning the commissioner of the map in a seemingly omniscient position, solidifying their position of control, changing perceptions and relationships with space itself. In this way, the Cartographic Gaze was the precursor to the surveillent gaze, epitomized by Bentham’s Panopticon and the work of Foucault. A number of texts have already examined the linkages between geography, media and communications; Innis’s (1950) classic text on Empire and Communications; Falkheimer and Jansson’s (2006) Geographies of Communication explores communication theory’s spatial turn, and conversely Adams and Jansson’s (2012) examination of geography’s communicational turn. Yet, as we move further and deeper into a digitized world we are bombarded with ever more instruments of measurement (big data, algorithms, UGC, VGI etc.), ever more far reaching versions of the printing press (Web 2.0, Social Media etc.), and the waters are muddied further by the development of Participatory-GIS systems, and the (re-)birth of Neogeography which purportedly offers up a challenge to the status quo (Goodchild, 2009; Haklay, 2013). Thus, it becomes essential that, just as we might question the 16th century map makers, we must now question data analytics, algorithms and their architects, the media, and those who claim to contest the cartographic gaze; to ask, ‘did you find the world or did you make it up?’ to quote Winnicott (cited in Corner, 1999). The media, data analysts and neogeographers all sit in-between the virtual and the real creating new forms of virtual time and space that are then superimposed onto territorial spaces (Potts: 2015). These new virtual spaces are still so too controlled and mediated from above by new omniscient digital Gods, propelled by their search for profits.

This call for papers aims to bring together the disciplines of geography and communication to draw out and challenge a number of problematic discourses in relation to power, knowledge and representation, recognizing not only that each are material and symbolic, but also that each particular place representation is contingent and unique (Hall, 1980). As the world, the media and our communications tools become increasingly digitalized and data driven we are increasingly constructing myths through algorithms, visualization, codification and mediation, of all which require us to rethink and interpret signs and their connotations (Hall, 1997; Barthes, 1972). Late twentieth century communication and information technologies have produced such a blurring of what is real and what is representation that the two can no longer be distinguished (Corner, 1999). Geography has often been concerned with the scales of state, capital, power, knowledge and representation, leading many theorists to cross the divide between disciplines; Michel de Certeau, Pierre Bourdieu, David Harvey and Henri Lefebvre being clear examples. It is then perhaps, through combining the knowledge of geographers, media and communication theorists and social theorists that we can better understand the twenty-first century’s increasing spatialization of thought and experience.

Themes may also include but are not limited to the following: